January 27, 2021 was a big day for Fujifilm, as they announced 5 new Fujifilm X and GFX series pieces of gear. A week before the release, I was given a review sample of two of them: the X-E4 and XF 70-300 lens. Below is my first look review on this brand new very versatile telephoto lens. The X-E4 review will come later; meanwhile all of the images in the "image quality" section below, are shot on this compact X-series. 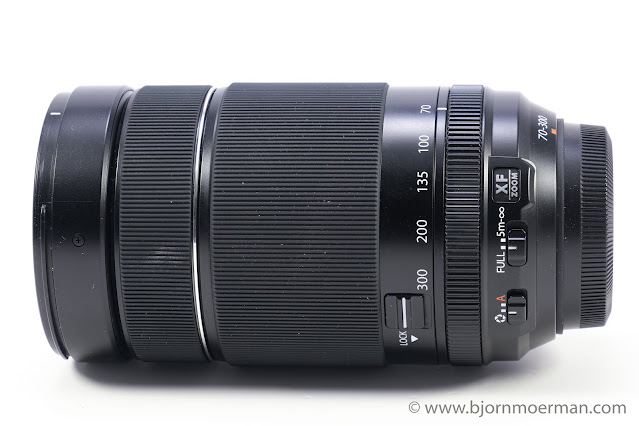 As usual, let's start with a few disclaimers.

1/ As an official X-Photographer,  Fujifilm Middle East, lend me a "sample" in order to review and shoot some sample images. I do not get to keep it! So no, I'm not paid to write the review. All is my personal opinion.

2/ This is not a pixel peeper review. You'll not find any shooting of lens sharpness charts. If that is what you are looking for, you might have to look somewhere else. Sorry. Images go through my normal image editing routine.

3/ Sample gear is not the same as a production copy when it comes to hardware and firmware. There might be small differences between them. 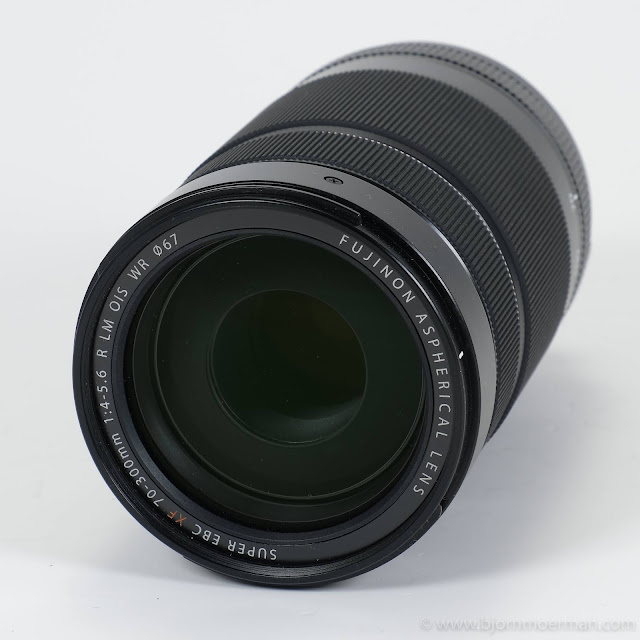 WHAT IS IN THE NAME?

Although the lens is not a "Red label"lens (Fujifilm's top of the line), it does feel of high quality. Yes, there is likely more high quality plastic used compared to the XF100-400 but that does not scare me at all. By the way, the airliners I fly for a living are largely made of "plastic" as well... One can compare it quite well to the XF16-80 and XF18-135 when it comes to overall quality feel.

The size of the lens, sits right between the XF18-135 and XF100-400, when comes to dimensions. At 70mm the lens is just over 132mm tall but the barrel extends significantly when zooming to more than 210mm. 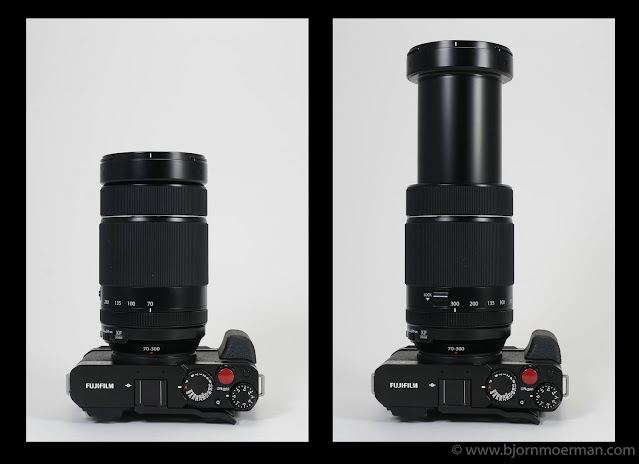 At 580gr it feels light and comes with a plastic lens hood which is large; about half of the lens size.

Although very compact the lens consists of 17 elements in 12 groups, including one aspherical and two extra low dispersion (ED) elements. 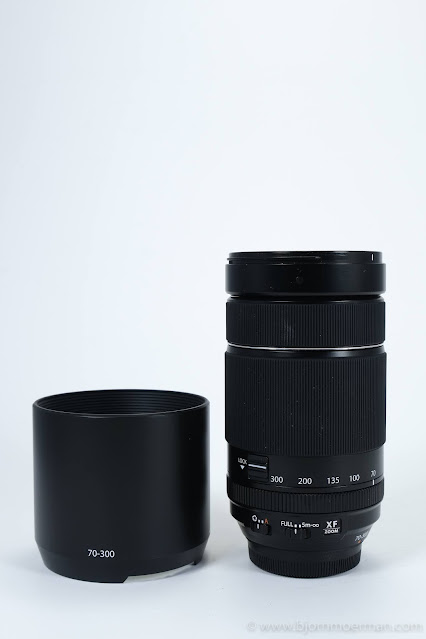 The aperture ring has a nice clickable feel to it. Needless to say it is not labeled with aperture numbers since the lens has a variable aperture (f4 to f5.6).

Typically for zooms with a larger spread of the focal length, the XF70-300 comes with a focal length limit switch; Full or 5m to infinity. If you are only focussing at more than 5m away, this position will improve Autofocus speed for far away subjects. 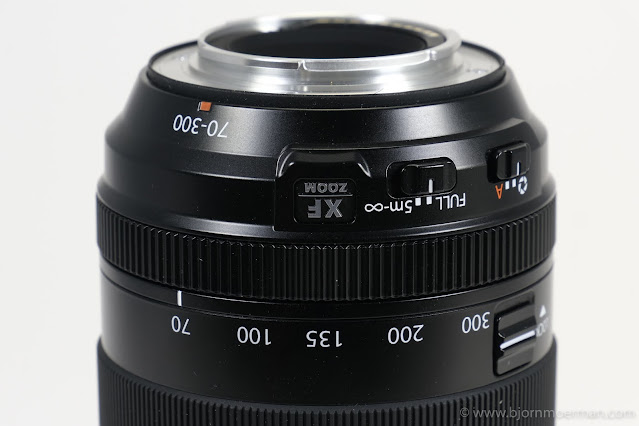 The XF70-300 does not come with a lens-foot which we often see on larger lenses. Mounting it on a tripod through the standard camera plate works well. Especially on cameras like the X-S10, X-T1/2/3/4 and X-H1 it feels very much balanced. Even on the smaller X-E4 is had no problems using it, although I would recommend using the optional metal hand grip for this new camera.

When using circular polarizers or variable ND filters, the lens hood does not have a slot at the top to change the filter position, like the XF50-140 or XF100-400. Having said so, the lens hood comes off easy enough to adjust your filters.

The lens barel is weather and dust sealed in 10 places and can officially be used to -10C. No, it probably won’t stop working at -11C! Dust sealing on a zoom lens is essential for me as I often shoot in desert environments. Just make sure to mount it on a weather resistant camera as well to get the full protection in challenging environments.

Given the lens is equipped with Linear Motors (LM), the autofocus is smooth and near silent. I had no problem focusing in average lighting conditions (with X-E4 and X-S10) and found it did a reasonable job in darker scenes. If you know your subject is at more than 5m, make sure to flip the switch to “5m-to infinity” for faster AF speed for far away subjects.

The minimum focus distance of 83cm (32.6 in) through the entire zoom range, is relatively short for a super telephoto, giving it a magnification of 0.33x, which can be seen in the image below. This allows for some good close-up photography (not real macro) with good fall off and bokeh. When using the XF 2X TC, the magnification becomes 0.66x. 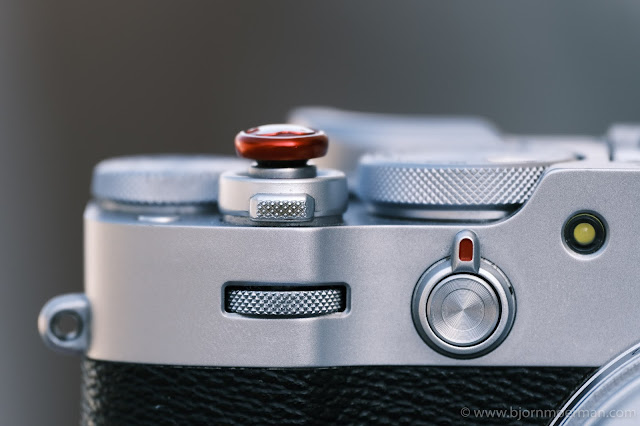 The XF70-300 comes with 5.5 stops of built in Image stabilization (OIS), to help avoiding camera shake, which especially is more useful at the long end. Obviously it doesn’t protect against subject blur of moving subjects. 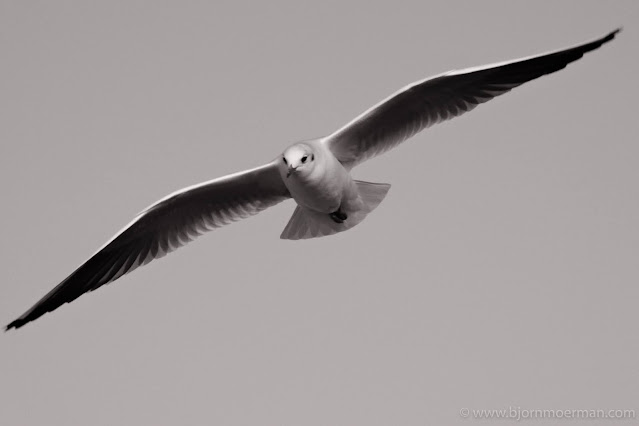 There is no dedicated OIS ON/OFF switch. If one really wants to switch off the OIS, one can do so inside the camera menu. Unlike older OIS systems, Fujifilm recommends leaving it on, even when mounted on a tripod as it is clever enough to know when to work and when not. When used on the newer bodies like the X-T4 and X-S10, it works well with the 5-axis IBIS (In Body Image Stabilisation) and is promised to give a total of 6 stops of image stabilization.

Until recently, only three X-series lenses were officially supported to be used with the Fujifilm Teleconverters (also called tele-extenders); the XF 1.4X TC and XF 2X TC. The XF70-300 however is now also supported, which immediately makes the lens much more versatile! Personally I only own the XF1.4X TC so I can't speak for the 2 times extenders.

For those not aware, a teleconverter (also called a tele-extender) is  a secondary lens which is mounted between the camera and the existing lens, in order to increase the apparent focal length and therefore give a greater telephoto effect. 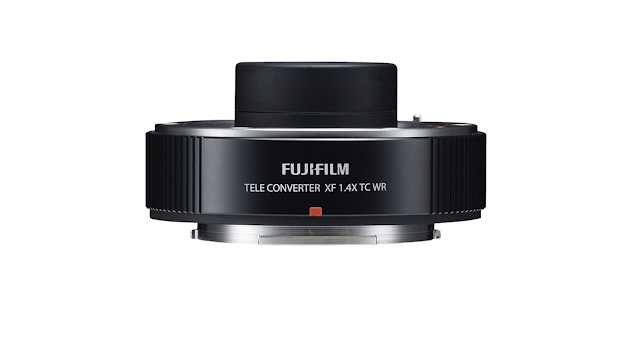 Typically TC's are made for a 1.4x, 1.7x or even 2x magnification. Unfortunately, the extra reach of using a teleconverter never comes 100% free. Because of the loss of light, the maximum wide open f-stop reduces; for the XF 1.4X TC this is one stop. The XF70-300 lens which normally has a wide open aperture of f 5.6 at 300mm, now becomes a f8 lens. When working on a tripod or when there is sufficient light, this is of course not a problem.

Teleconverters often also degrade image sharpness somewhat, although I had really a hard time seeing this when paired with the XF 1.4X TC. The image below shot at over 360mm is a proof of that! 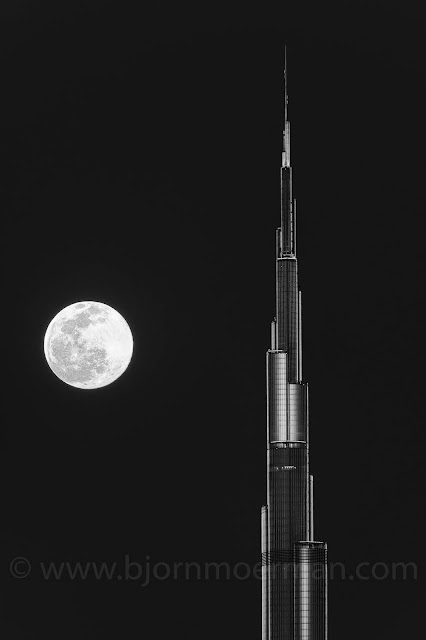 Because there is less light entering the lens, the autofocus is a little bit slower in more challenging light conditions. For normal light conditions it is however perfectly fine.

The advantage of the teleconverter is of course that one has like a second longer lens in a very small form factor. Especially when carrying large amounts of gear is critical like on airlines or during mountain hikes, this comes in very handy!

Image sharpness of this lens is good throughout the focal range. Not unexpected, the image quality is ever so slightly less than the much larger and more than twice as expensive red label, XF100-400. Try carrying the XF100-400 on full day mountain hike and I'm sure you'll be more than happy with the XF70-300 image quality!

Let’s have a look at some real life images shot over the last 30 days in a variety of circumstances. Ideally I wanted to shoot some fast action but these events are still quite rare due to the pandemic.

Images were in camera jpegs with some minor editing done to them. Once again, this is not a pixel peeping contest but an illustration on how I personally would use the lens in my daily shooting. Images have been cropped 4000px at the longest length for optimal website loading. Click on them for a full size view. They can NOT be used for anything other than personal use and shall never be used for third parties  without prior authorization by Bjorn Moerman Photography.

I did have a hard time finding negative things about this new piece of glass and definitively would like to spend so more time with it for fast action photography like airshows and motorsport events.

Personally I see this lens as part of a compact travel zoom lens combo when used with the XF16-80 f4 lens. This way one will have a full frame equivalent of 24mm to 457mm, for a fraction of the prize and size of other camera/lens options, which is weather resistant.

Having this lens as your only lens for travel might be limited at the wide end. If looking for a single lens option, I would consider the XF18-135 lens, which of course falls quite a bit short at the long end.

I see the XF70-300 as a much more compact and cheaper alternative to the red label XF100-400 lens (review here). Some existing XF50-200 users might also be interested in upgrading as the lens has the advantage of being weather resistant, longer in focal length and having a better OIS.

At 799,-USD this lens is definitively more than worth its price! It should be available in most places somewhere in March 2021.

This blogpost can be shared without prior permission. Just make sure to credit "Bjorn Moerman Photography".

Anonymous said…
Thanks for the nice review. Just a small correction: I believe you meant to write "focus limit switch", rather than focal length limit switch, although 5m of focal length would be awesome! ;-)
February 9, 2021 at 2:39 AM

Anonymous said…
@Elvecino - The reason why there is not more of a stabilization improvement when combined is that each stabilizes different movement; IBIS stabilizes parallel to the back of the camera, while OIS stabilizes tilting movement.
February 10, 2021 at 11:09 PM

Anonymous said…
Thanks for the detailed review! It further cements my intent to buy this lens and the 1.4 extender!