Always find it kind of strange, how some cities seem to work much better for Street Photography than others... Outside Europe, New York and Hong Kong are my two favourite places to document the streets.

When it comes to large cities in Europe; Amsterdam and Paris are probably the highest on that list.

However, on a smaller scale, I recently have become a fan of another interesting place: Brighton, a town on the South coast of England, about 1 hour by train from the capital, a full of Street Photograph potential!

After the railway started reaching the coastal-town in 1841, it quickly became a destination for day-trippers from London; something that still is valid today.

Some might also know Brighton as the Gay capital of the UK or the place where some famous music bands were discovered... Either way, the town has definitively somewhat of an eccentric feel to it. Perfect for good old Street Photography! 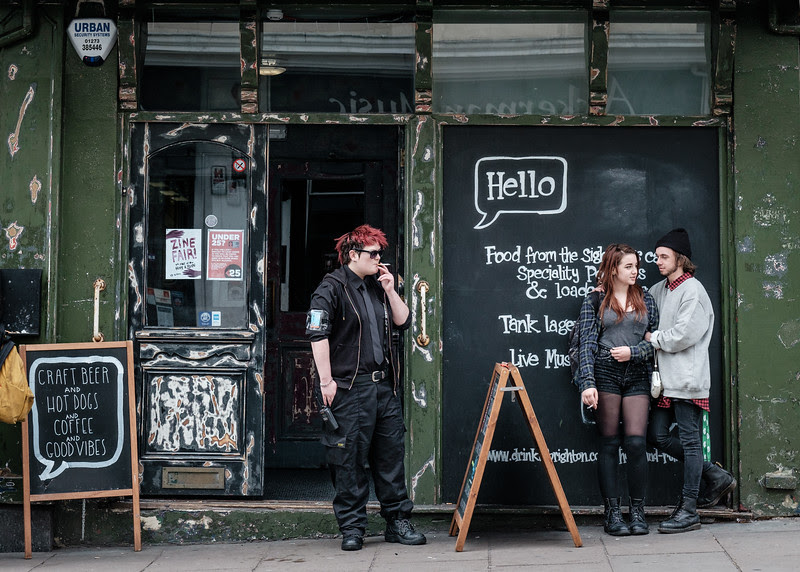 I'm particularly attracted by the somewhat crunchy feel of the scene and find that the viewers eyes are kept well inside the frame. A highlight in the colour version of the image, is clearly the red hair of the person in the centre of the frame. To check out a Black and White version of the same image, click here.

More of my Black and White Street Photography shot throughout the UK, can be found in a gallery called: "Shooting UK streets".

Remember: "The whole point in taking pictures, is so that you don't have to explain it in words" - Elliott Erwitt