Pic(k) of the week 51: Moonrise over Dubai

As a project for the winter, I've been playing with the idea of shooting the moonrise and moonset from a few locations in Dubai.

One of them was from the Eastern part of the Palm Jumeirah, where I was looking at framing the rising moon over the Burj al Arab; sometimes been referred to as "The Worlds only 7 star hotel".

Even though I have some tighter shots of only the Burj al Arab, I've chosen one where the Burj Khalifa can also be clearly seen on the left side of the image.

Using "The Photographer's Ephemeris" (TPE); a program I frequently use to plan the exact position for moon/ sunrises and sets, it was clear yesterday night was the one day of this moon cycle it could work!

Totally by coincidence, I bumped into US travel-photographer Elia Locardi at the site; if you are not familiar with his work, you have to check it out at his " Blame the Monkey" site which has some amazing HDR photography. Accompanied by another Dubai based photographer Charlie Joe, both were great company to shoot along with!

Due to a haze layer at the horizon, we suspected that the moon would only become visible once it was higher in the sky. But we were however pleasantly surprised when the orange coloured full moon appeared low on the horizon, just a few minutes past the official moonrise time.

Applications like TPE, which also are available for smartphones, are a great solution to set up all camera gear before the sun or moon are visible at the horizon. It takes all the guessing out of the equitation and is something I can not work without! 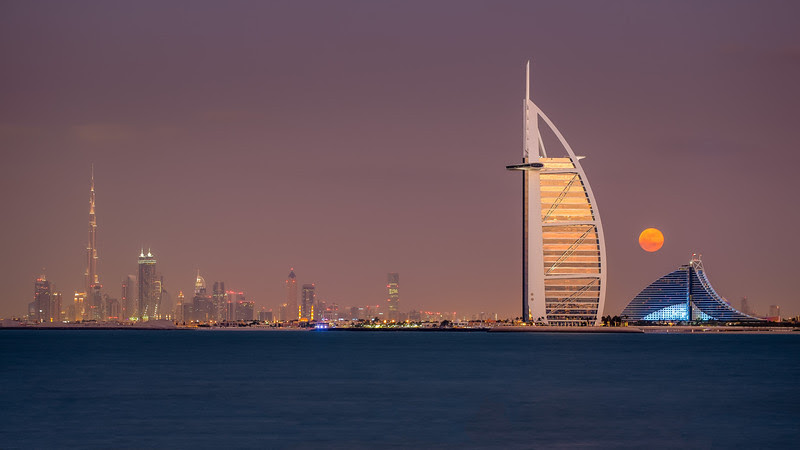 More of my Architectural images of Dubai, can be found here.

Remember: "We are all like the bright moon; we still have our darker side" - Kahlil Gibran