It has been an interesting last 6 days for the United Arab Emirates (UAE); as the country is celebrating its 42nd year on December 2nd, a few days earlier Dubai won the final 2020 World Expo election.  Happy anniversary UAE !

Needless to say that the National day celebrations, which are normally already well attended, have been very popular over the last weekend this year.

Last Saturday I attended the Al Ain Airshow opening day which was in its 10th year. As my backlog of images to be edited should be slowly cleared over the coming week, I will be dedicating an entire blogpost to this great aviation event from the UAE desert!

This weeks Pic(k) of the week is an image of one of the newest military jet teams; Al Fursan (Arabic for Knights), is the UAE's National team flying 7 Aermachhi 339A's. The team was created in 2011 and has been trained by the world renown Italian Frecce Tricolori flying the same aircraft.

Even though the team flies only 7 aircraft at the time, the entire fleet 10 UAE MB339's is dedicated to the team and the aircraft have been converted by the Aermachhi factory to the MB339 NAT (National Aerabatic Team) standard.

The aircraft have been painted in a spectacular colour scheme; the lower side has the UAE colours, while the top Gold and Black, stands for the sandy deserts of the UAE with the oil reserves below it. 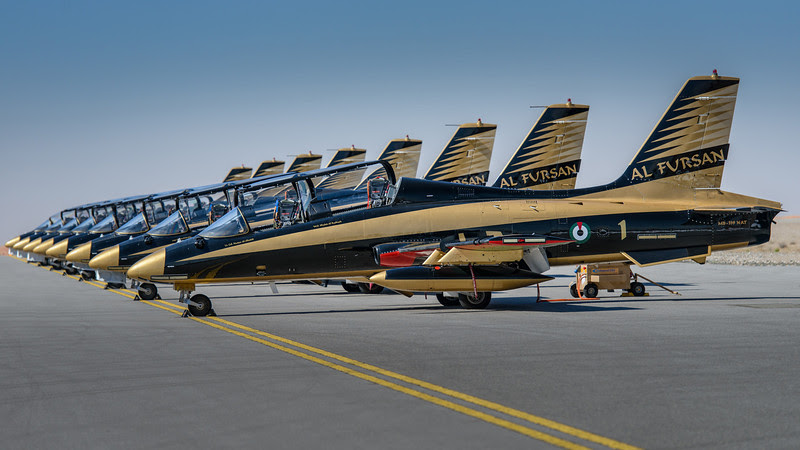 Even though one should obviously not compare them to teams that have a history of several decades, (e.g. Red Arrows from the UK, Patrouille de France), they do make for an entertaining show. I'm confident that more training and exposure over the coming years, will built them up even further!

As stated above, I'm trying to keep up with the image editing and blogging of my New Zealand trip as well as the last shoot in Al Ain. More mages are already available in the new Al Ain Airshow 2013 gallery.

Next post, will be about the New Zealand photo-flying adventure with the new Fujifilm X-E2…