The launch of the new Fujfilm X-Pro 3 has been controversial with quite a few people being very opinionated about the new "hidden LCD" screen at the back of the X-Pro 3. I personally always refrain from commenting on new camera gear until I've had hands-on experience!

I shot the new X-Pro 3 for a week but unfortunately had to return it earlier than expected to the fine guys of Fujifilm Middle-East. I do however a second copy in the coming days and will eventually blog about my experience with the new camera somewhere in December. Meanwhile a few words below as part of this weeks Pic(k) of the week. 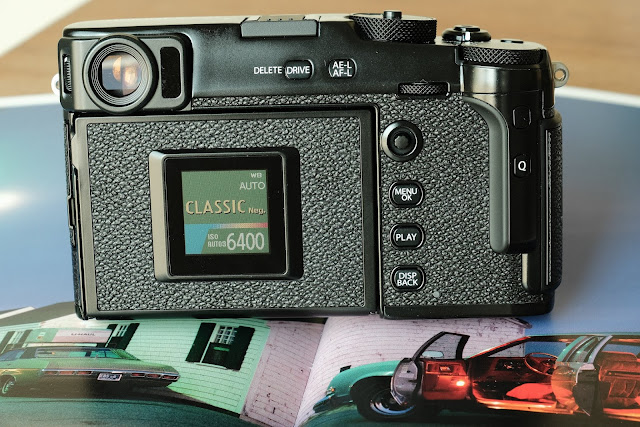 I've never been a full time X-Pro user, but have always enjoyed using the Range Finder like X-series. The newer Processor and sensor brings image quality and autofocus in line with the present X-T3; in some aspects even better, but there is much more. When it comes to "developing the in-camera jpegs" there are new options to fine-tune the image and then there is the new "Classic Negative" Film simulation which works great for Colour Street photography. If you like Classic Chrome, you'll love this one! Not sure why Fujifilm just didn't call it Superia, since it clearly simulates this type of film. A good explanation by Fujifilm about Classic Negative, can be found here.

And then there is the LCD screen or the lack of it should I say. In to avoid  "chimping" (looking at the images you took on the LCD), Fujifilm has decided to flip the screen around facing the back of the camera. According to Fujifilm in the interest of going back to "pure photography" and in order to avoid "chimping" (slang for reviewing images on the LCD straight after shooting). There is a mini display at the back displaying the common cameras settings or the selected Film Simulation.

If you want do some more involved menu changes or can't resist reviewing the  images, the LCD does however hinge at the bottom displaying the LCD below the camera. The flip down LCD screen also works great for shooting from the hip, something I often do for my candid photography in more sensitive areas.

Back to my Pic(k) of the week, shot while hunting the streets of Deira, in the old part of Dubai. Yes, I know. I do have a sweet spot for those Afghani bakeries. Maybe because I'm the son of a baker myself?

Image details:
Two other things stood out while using the X-Pro 3 for the first time. The X-Pro 3 EVF (Electronic View Finder) is a lot better than its predecessor X-Pro 2.

Secondly the Custom settings of this camera now store all of the menu settings like it should have been since day one on all X-series. While before Custom settings were limited to IQ (image Quality) settings only, one can now save all of the AF/MF settings, Shooting settings and some of the Set up menus like screen set-up etc... A great addition which is hopefully going to come to the other cameras like the X-T3, X-T30!

The new X-Pro 3 is clearly not for everybody, nor is it meant to be. Don't forget that there are plenty of other great Fujifilm (and other brands) cameras around. Pick what you like best and most importantly, make some great images!