Hard to believe yet another year just flew by. I'm writing this post, a few hours before 2010 comes to a close. Just under 12 months ago I started my Pic(k) of the week project. I clearly remember the first image made early January in a wintery Belgium.
Overall 2010, has been another exciting photography year!
It has been especially good year for travel photography. In April, I came home with images from Delhi, Agra, and Jaipur on my weeklong " 2010 Incredible India" photo tour. After the summer, I left on the amazing African photo adventure in Namibia called; "The Beauty and the Beasts".
My airline job, brought me to interesting places all over the world. Check them out in my Travel gallery.
The Yas Hotel (on the Formula one circuit in Abu Dhabi) images collection, became my most popular Architectural photography series ever. The images were showcased in magazines in the US, Europe, Middle East, all the way to Japan.
My Aviation photography highlights were the shoot for the making of the "Abelag" calendar, Air to Air photography while in Belgium last Summer and the MEBA 2010 Business aviation event held in Dubai. 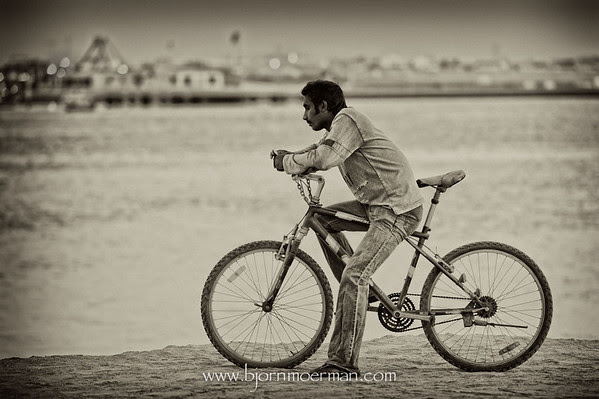 While shooting some Architectural work at Dubai Creek, I noticed this Indian man. To me, it feels like he is thinking about the past and future... something we often do at this time of the year. This shot is not posed or set up. Actually he probably never realized he was being photographed!
Image details:
Nikon D700, 70-200 2.8 Nikkor lens
ISO 200, f3.5, 200mm, 1/50s
RAW processed in Lightroom 3
Nik Software SilverEfex
Last but not least, since I'm a strong believer in personal photography projects, I will continue my "Pic(k) of the week" project for a second series. All images of the 2010 edition can be found here.
Happy New Year!
BJORN
Follow me on Facebook
Follow me on Twitter