The Fujifilm Instax Share SP-2 printer, replaces it predecessor the SP-1. Although not brand-new (released June 2016), the first time I used this pocket Instax printer, was during the recent 24 hour project in Dubai on April 1st. 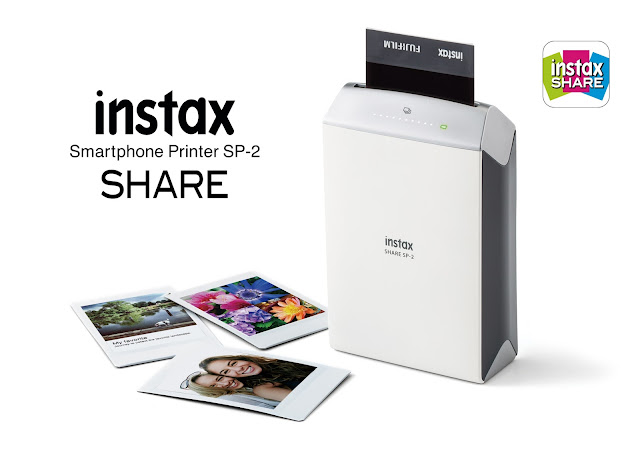 With its portable size and weight, the Instax SP-2 is the perfect pocket printer to be taken on the road. If you want to make small credit card prints to give out at weddings, birthday parties or even on Street Photography walks, the SP-2 is what you are looking for!

Before we go any further, you are not limited to using Fujifilm cameras in order to use this device.

The Wifi enabled small printer, comes in two colours (silver and gold) and is slightly smaller and lighter than an X-T1/2 camera body. It takes both the Fujifilm Instax mini film as well as the brand-new "Monochrome" Instant film, for better Black and White prints (see below Image quality). 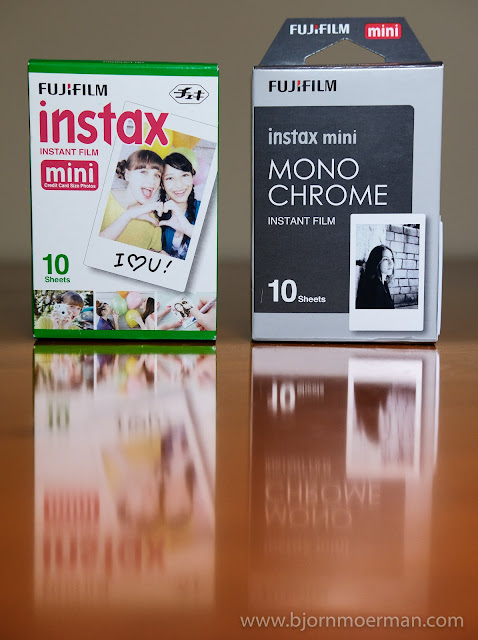 For the ones that are too young to know what polaroid cameras look like, there are no ink cartridges in the printer itself; the image is developed right on the paper!

Loading the film is dead easy; after unzipping the bag, just align the yellow dots and you are done. 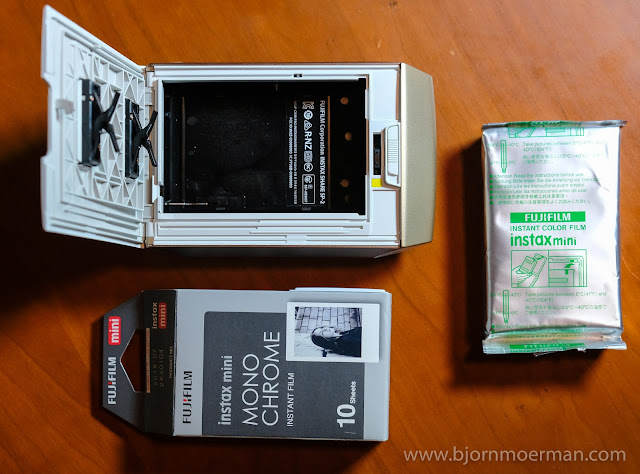 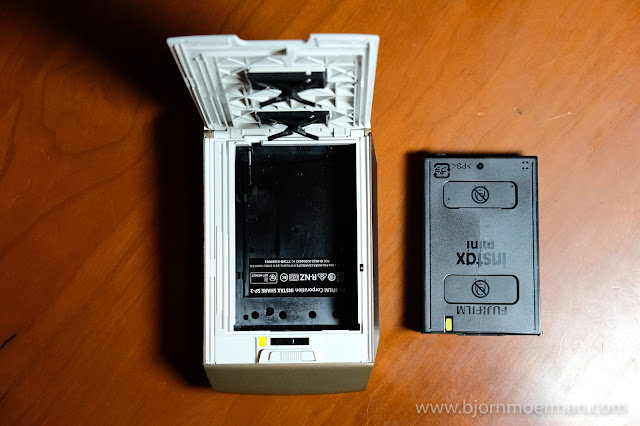 BUTTONS, LIGHTS and BATTERIES
There are only two buttons on the device; one power button and a "Reprint" button on the side. The second one is to be used if one wants to print the last image again. On a few occasions, I did press the button, which lead to an unnecessary print being made. In the future, the button could potentially be better guarded against accidental use or placed in the a different spot.

Next to the slot, where the photographs come out, there is a battery indicator light as well as a series of small white LED's, showing how many of the max 10 slides are still available in the installed film cartridge. 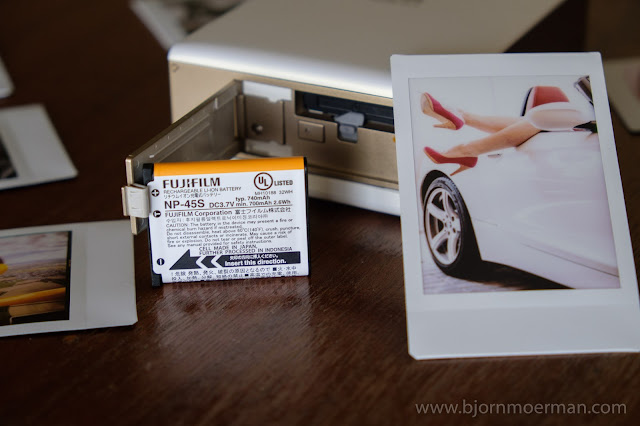 Unlike its predecessor, the SP-1, which held two CR-2 batteries, which are not always easy to find, the new one uses a Fuji NP-45 battery, which is also used on some of its smaller compact cameras. One full charge will last about 100 prints, which is plenty for a device like this. If needed one can recharge the battery through USB (micro USB cable) or in a dedicated battery charger which is not provided in the package.

HOW TO PRINT?
Your main interface to start printing is the "Instax Share" app available for iOS and Android phones and tablets. Once the image is on the phone or tablet, one can directly print from the application as long as the Wifi connection is established not the phone/tablet. I did find the wireless connection easy to set-up and very stable. 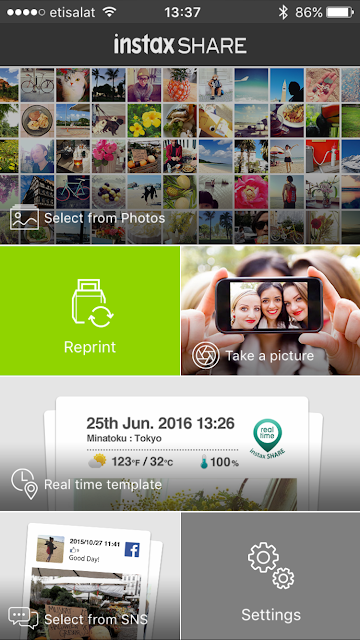 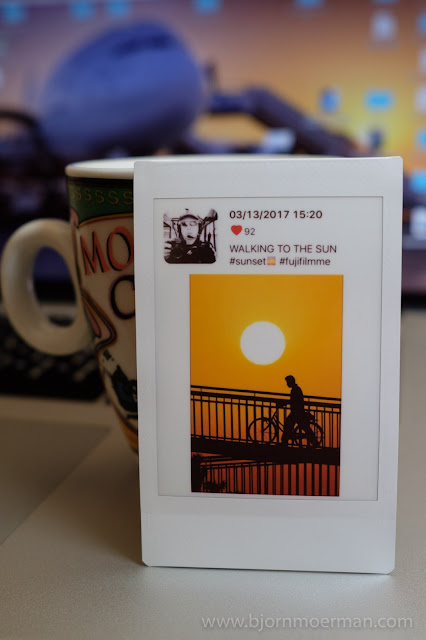 On the app, one can also choose from a large variety of print templates, including some seasonal ones like a Happy Birthday, New Year and Valentines one. Not something I personally would use every day, but still fun nevertheless!

Another interesting one is the "split image"; it will print two photos of a single image split in two; creativity at its best! Just be careful that you still have a minimum of two useable slides left in the printer before starting the split image print. 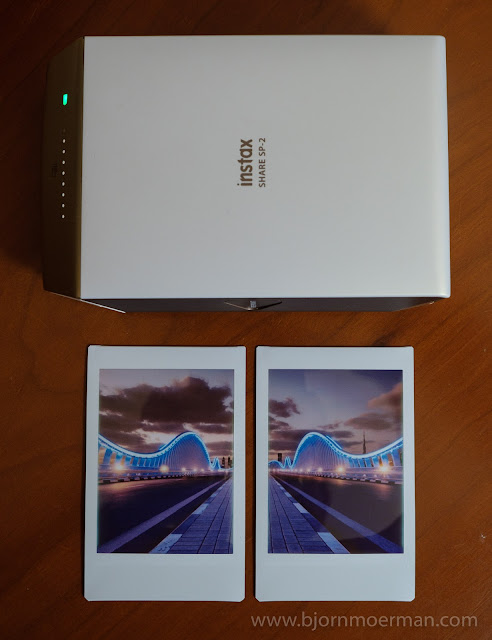 Alternatively one can also print directly from one of the many Fujifilm Wifi enabled X-series cameras.  I haven't tested it, but I suppose even printing from the brand-new Medium Format Fujifilm GFX camera should be possible... it might however be a bit overkill!

It takes about 10s (compared to 16s for the SP-1) for an image to print and then another 5 mins before the image is fully developed. There is still something nostalgic about the wait for the image to appear! For the ones going back to the polaroid days, there is absolutely no need to shake or wave your Instax print, just let it sit for a few minutes and you are done!

IMAGE QUALITY
While the older SP-2 was limited to a resolution of 640x480px at 254dpi, the new model manages 800x600px at 320dpi. While the images of these small print might not be the sharpest you've seen, one is missing the point if that is your main priority! It is all about being able to share a moment with the people around you. 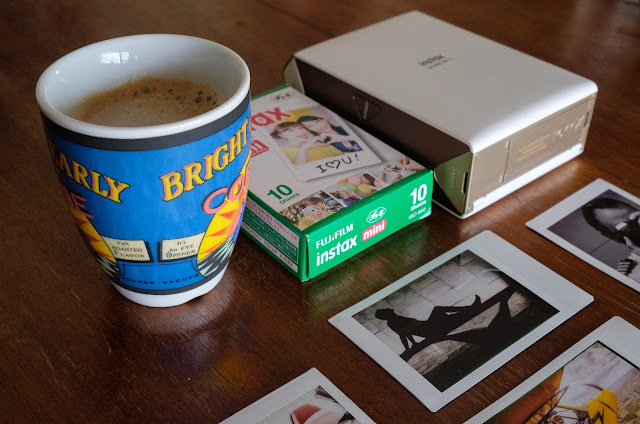 When printing Black and White photographs, I strongly recommend using the Fujifilm Instax Monochrome film. Using Color film often shows a bit of a warmer color cast as can be seen in the image below (left is printed on the standard (colour) film, right one on Monochrome film. 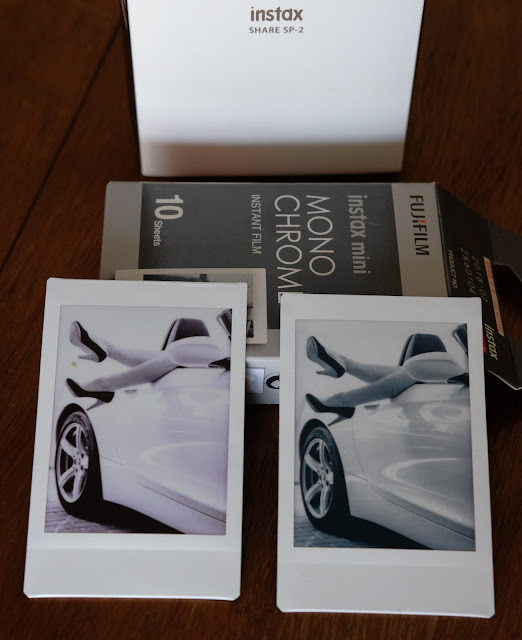 HOW MUCH DOES IT COST?
Today the SP-2 sells for about 160,-USD in the US and just under 200,-EUR in Europe; prices in the UAE seems to vary somewhere in between.

The device does normally not come with Instax Film packs included. Standard price for a pack of 10 slides is about 10, USD, making it 1,-USD (1,-EUR) per image. However when shopping around, one can easily find larger combined packs which bring the price per image down to about 60 cents. 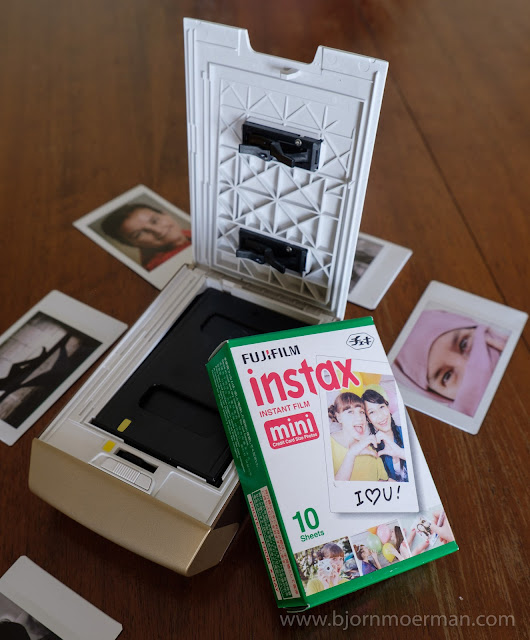 WHO IS THE INSTAX SP-2 FOR?
I doubt it the printer is aimed at only one type of photographer; any photographer who likes to share small printed images on the go, is potentially in the market for a pocket printer like the SP-2.  The retro feel of the instant image, is something that both young and old appreciate.

Wedding and other event photographers are probably the largest group of potential buyers of the SP-2's, but I can also see some Street and/or Travel photographer wanting to bring one to a shoot. In any case, there is something to be said about the look on the face of whoever has never seen Instax film develop! 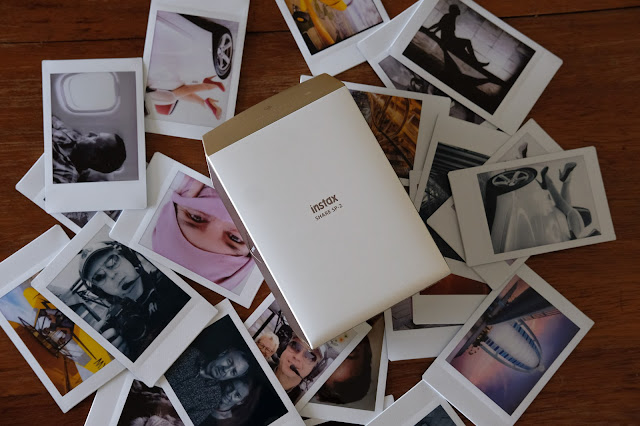 If you are in the market for a small on the go instax printer, look no further!

After all, remember: "A picture is not a photograph until its printed"!