When Fujifilm announced the XF35mm f2 lens, about 10 months ago, a lot of street photographers were very excited! In no time it became one of most popular lenses for the X-series system... And rightly so; its compact size, great image quality, all at a "reasonable" price, made it a no brainer for a lot of the X-shooters with an interest in Street Photography. 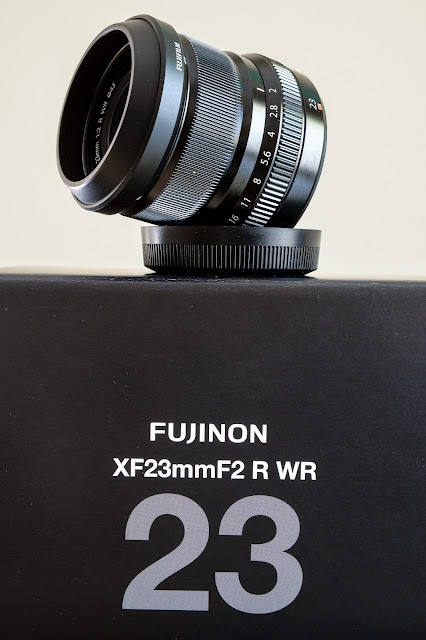 It wouldn't take long before Fujifilm photographers started asking for a 23mm lens in a "similar form factor" as the 35mm f2. And typically for Fujifilm, they do pay attention to its users...
Today, August 25 2016 the new XF 23mm f2 R WR lens is reality! The announcement didn't come as a complete surprise as it already showed up on the latest X-mount Lens roadmap, a few months ago.

While the aperture ring is identical to the 35mm f2, the focus ring is about 1/3 wider; a very welcome addition for those "hardcore" street photographers which prefer to shoot in manual focus! 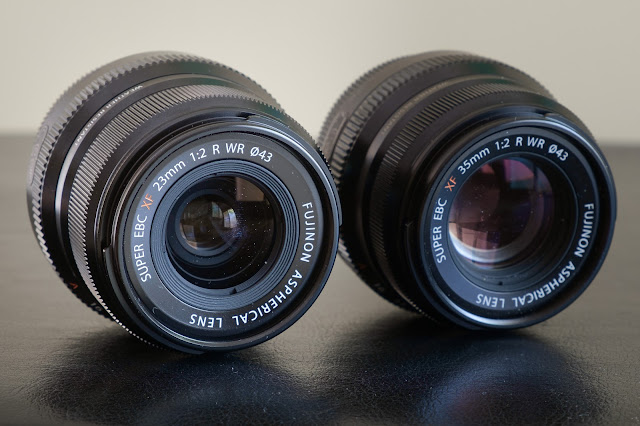 Its overall shape is so close to the 35mm f2, that I did find myself occasionally grabbing the wrong lens. Both lenses also share the same 43mm filter size.

Just like the 35mm f2, it does not have a depth of field scale on the lens barrel; likely in an effort to keep the lens as compact as possible. Beside the standard black, the lens is also available in silver.

Last but not least, the lens is Weather Resistant (WR); great to go out shooting in the rain/snow as long as the camera body is also Weather Resistant. As of today, the X-T1, X-Pro2 and X-T2 all fulfil that requirement!


The provided lens hood is very different from the 35mm f2 one for two reasons:

The good news is that the optional LH-XF35-2 metal lens hood, of the vented shape, is supposed to work well on the new lens as well. I'll be ordering one asap, although I don't really agree with the steep asking price for a "lens hood"! 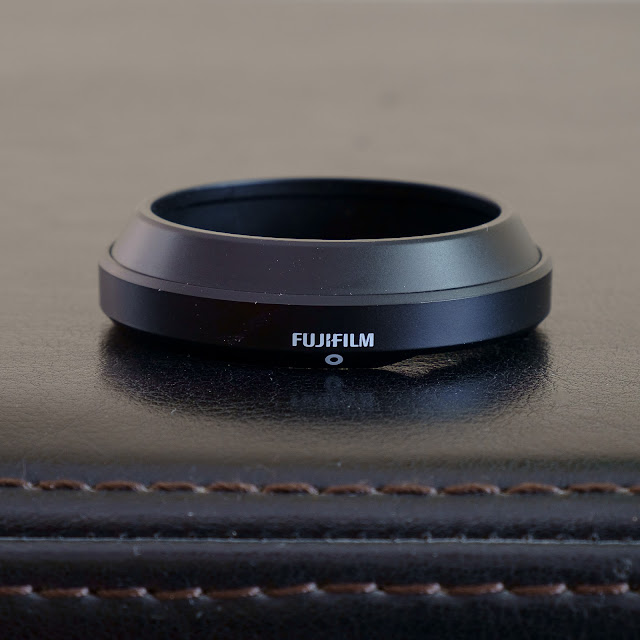 During the limited time I had the lens, I've experimented a little with using the 35mm f2 lens hood and vice-versa and did not notice any vignetting. Even without the lens hood the contrast remains very good. All of the colour images shot around Dubai Creek below, have been shot without it... Oops, forgot it at home!

I did not notice any excessive or weird sun-flare effects, which is in-line with the other recent glass from Fujifilm. 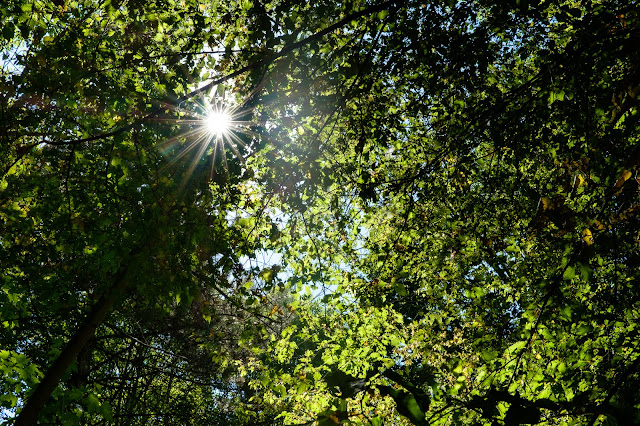 AUTOFOCUS
Can be summarised in two words; "Very Fast and Silent". Its 3 year old predecessor, the 23mm f1.4, isn't the fastest lens when it comes to autofocus; so it is probably better to compare it to the newer 35mm f2 lens again.

Shot on a pre-production X-T2 body, I did find it being at least as fast as the 35mm f2 in normal light and noticeably faster in very low light. Today, it is probably the fastest X-series prime I've shot when it comes to autofocus. In all fairness, I did never think the 35mm f2 was a slow lens to start with!

IMAGE QUALITY AND BOKEH
Fujifilm states the following about the lens construction: "The lens consists of ten elements in six groups, including two aspherical elements. The optimum positioning of the aspherical elements, ensures flatness of the image plane, for edge-tot edge sharpness". A bit of a sales pitch, but it pretty much seems to be right on!

If we look back to the 35mm f2 lens, wide open (f2.0), it does suffer a bit from softness in the extreme corners. More details can be found in my review here. The 23mm f2 clearly does not have this and is sharp all the way from its widest f2 aperture.

Its sweet spot for best centre sharpness seems to be around f4-f5.6; pretty standard for an f2.0 lens. Strange enough at a 1m focus distance, the extreme corners seemed a little softer at mid apertures f4-f5.6 compared to when shooting all the way open (f2) or more closed down from f8 and smaller. Images above and below are SOOC (Straight Out Of Camera) Jpegs, obviously taken on a tripod. Click on the image for full screen view; the top left of each shows the meta data. The zoomed in shot below shows the extreme bottom right corner. 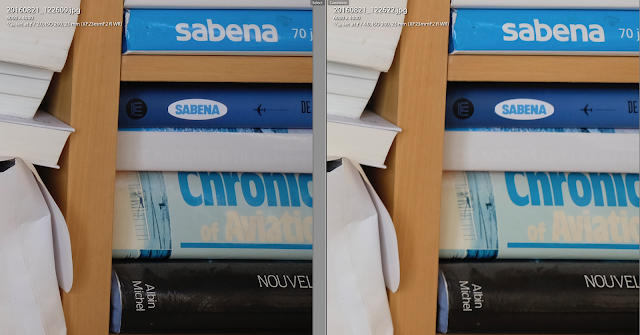 Post publication 05 SEP 2016: Further testing of image corner sharpness has shown different result when an average focus distance is used. Below are two images shot at 2m focus distance. The second image is a 100% zoom into the left bottom corner. A "slightly" sharper at f5.6 (right) compared to f2.0 (left) in the extreme corners is visible; this is in line with most high quality lenses.

A 35mm equivalent (23mm x.1.5 crop factor) lens will never be the bokeh monster like a longer 90mm or so. However, especially when focussing at the minimum focus distance, the depth of field is limited, as can be seen in the image below. Especially for street photography, I will rarely shoot wide open, as I'm after a larger depth of field.

For the bokeh fans; the circular aperture blades consists of 9 sheets.


First of all, I'm not the guy that will shoot test charts to analyse different kinds of distortion. Practically speaking, I do not see any visible distortion at close focus distance. Image below is a SOOC (Straight Out Of Camera) jpeg shot with the Lens Modulation Optimiser ON. 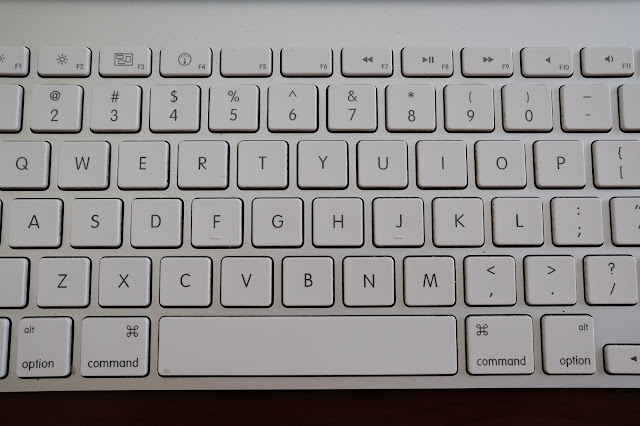 Shooting tall buildings like these in Dubai, obviously will show the effect of the somewhat wider than standard focal range; but this is easily corrected in Lightroom or other software. 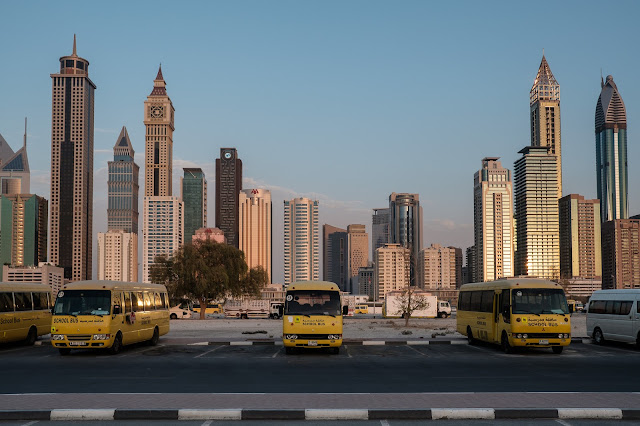 The new 23mm f2 lens will sell for 449,-USD which is 50 USD more than what the 35mm f2 launched at. I guess the fine guys (and girls) in Japan must realise how popular the 35 f2 is! Would have been nice if they could maintain the same 399,-USD price point, but once must recognise that 35mm full frame equivalent lenses tend to be a bit more expensive than the 50mm ones.

You don't need to wait too long to get your copy of the 23mm f2; early October 2016 it should be in most camera stores around the globe.

WHO IS THIS LENS FOR?

As I wrote in the introduction, this is pretty much a dream lens for Street Photographers! On a cropped camera body like all of the Fujifilm X-series, a 23mm lens becomes just about exactly 35mm full frame equivalent; depending who you talk this is often referred to as "the focal length for street photography". There is a reason why the hugely popular X-100 series carries that focal length as well!

A great advantage will also be for the ones using the lens on an X-Pro1 or X-Pro2 body with the Optical Viewfinder (OVF). The shape of this lens obstructs the OVF far less than the "classic" 23mm lens; which again is good news for Street shooters.

I would also recommend picking up this lens for somebody starting in photography and wanting to learn the craft the proper way. I'm confident that shooters starting off with primes will see their photography improve much faster. Doing it with a 35mm full frame equivalent makes it a great start!

CONCLUSION
First of all, with every release of a new Fujifilm prime lens, I realise how much more I like shooting primes nowadays. It makes it so much more enjoyable to walk around with a small lens and just zoom with your feet. You'll be amazed how quickly your brain will adapt to a certain focal range. After less than an hour of shooting, you will exactly know where to stand to frame the shot you had in mind. Something that obviously can not be said of a zoom lens, where one changes the focal range continuously.

Anyway back to the 23mm f2 ! As of today, just like with the older 35mm f1.4, the 23mm f1.4 will also remain in production. I guess some people might want the slightly brighter maximum aperture. For my own use on the streets, I don't however see such a reason and will be more than happy with this new f2 lens!

I actually never purchased the 23mm f1.4 as I found the lens a little too large and heavy for street photography anyway. 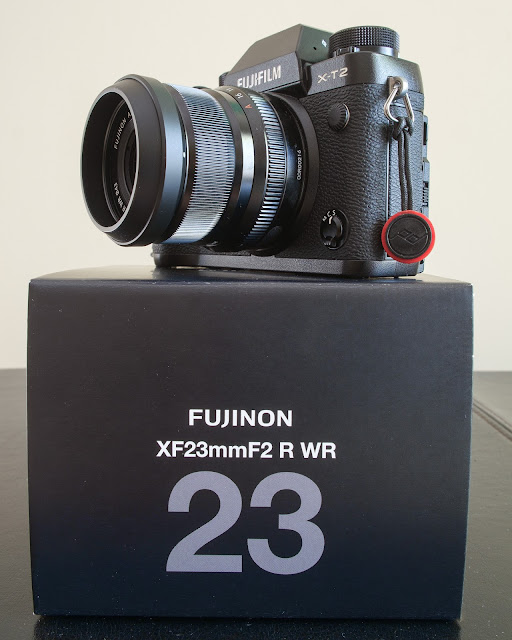 In case you are still not quite sure, mine is on order! Thanks Fujifilm.


Feel free to share this blogpost on your blog, forum or social media platform. No prior permission is required. Just make sure you credit www.bjornmoerman.com

Jean said…
Hi, Bjorn. Thank you for an great quick look at a piece of optic that a lot of people have been waiting for. You have touched on a lot of the small questions that arise when we have not had the chance to handle or shoot with it yet. What we do know, is how the XF35/2 is, so your close comparison was very useful. Pictures sure are interesting and excellent as always.

My order went in Yesterday. And the X100T will probably see retirement now.

Glad to see a review of the 23 f/2, but why no image quality comparisons to the 23 f/1.4??? I think this review would have been of greater benefit to your readers with the aforementioned comparison, rather than to the 35 f/2.

Otherwise a good article that I enjoyed reading.

Bjorn Moerman said…
Bob, send you an email with a RAF file.

KeithT said…
Just received mine and yes it is a keeper. The only problem now is the firmware to get the frame lines correctly - which isn't available at the moment.
October 31, 2016 at 8:11 PM

Unknown said…
Hi Bjorn. Thanks for the info regarding 23mmf2, I bought my lens a few weeks ago, and now i have a problem i dont know where if its the lens or my camera body xt1, please i need some help because when i shoot especially at night i saw something pinkish on the lower pf the image. You can email me at lynsantos143@yahoo.com and maximillanjugo@gmail.com
Please i need someone to help me I'm a newbie and it's only my hobby, I just so sad when i saw something that's not good on the picture I shoot. Thanks in advance and hope that you can help me coz I really love photography.

Unknown said…
Hello!
I have an xc 16-50 and wonder if I should get this 23mm f2.
The thing is that with my landscape photos I feel the far object/subjects loose a lot of details so crop is not easy using the 16-50.
It would help me a lot if you can send me a landscape photo in Raf taken with the 23mm f2.Thank you
December 6, 2016 at 6:09 PM

Bjorn Moerman said…
Yes, of course all XF lenses are compatible with the X-T10

Unknown said…
I guess you are using very high iso, any iso above 6400 will do that on dark borders because native iso is max 6400, so anything above will do pink/purple artifacts
February 22, 2017 at 4:05 PM

Unknown said…
It was an answer to Lyn Santos, so your lens is not faulty at all, it's how Fuji X Trans cameras work with non native ISO
February 22, 2017 at 5:48 PM