If one would ask me what I miss the most while living in Dubai, I don't have to think long... "Flying the little aeroplanes"! As an airline pilot, I get to fly the largest, latest and greatest, but that is only the job. To me, the real fun in aviation, is in what we pilots often refer to as; "General Aviation" (GA). Be it touring in a single engine aircraft over the amazing New Zealand's South Island landscapes, following a river bed in Oregon at a few hundred feet or just a 30 min local flight on a lazy Sunday afternoon; that is what flying is really about!

Over the years, I've been able to do some amazing flying adventures in places like New Zealand, Florida and the Bahamas, most of the Western US, and will continue to do so...

But just like a lot of airline pilots, we tend to eventually go back to the basics; a "low and slow" aircraft, like a Piper Cub, where one cruises at a leisurely 80 knots, watching the scenery go by from 500 feet!

The Piper Cub, by most pilots often referred to as "The Cub", is a tandem two seat tailwheel airplane which over the years has trained thousands and thousands of pilots. It goes back to the grassroots and has become an icon for aviation. While the original Piper Cub design is pre World War 2, the aircraft has been in production till 1994 with more than 10.000 being built!

Last week, I got to fly a 60 year old "Piper Super Cub", at a small grass strip near London Heathrow. While the Super Cub is slightly wider and more powerful than the J-3 Cub, it still is very much a back to basics aircraft; no fancy instruments or complicated aircraft systems, just the pure joy of flight!

Like a Ferrari has to be Red, the Cub needs to be Yellow! 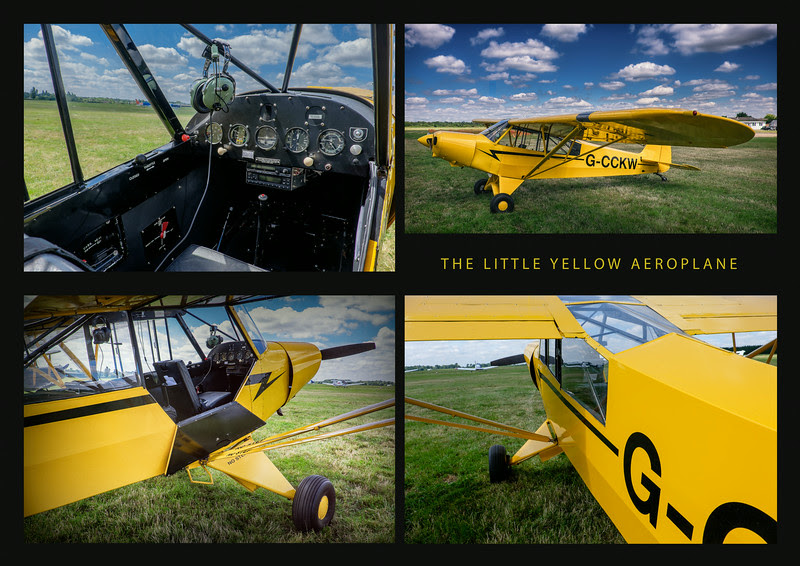 Because this weeks Pic(k) of the week, consists of a total of 4 images, I won't be bother giving you the full Exif data below...

Image details:
Fujfilm X-T1 with the weather resistant XF 18-135mm lens
RAW files edited in Lightroom 5.5
Print module in Lightroom 5.5 to make the 4 image template and then used the print to file function

Bringing it back to photography; the Cub is also a great platform for aerial photography, as one can easily open the door in flight to avoid the nasty plexiglass reflections.

I'm off to Toronto Canada now, where over the next few days, I hope to do some more testing of the new 18-135mm lens and guess what... fly some more Piper Cub!

I like to finish with a little pilot story, I once heard and replicates a bit how I feel now.  Rephrased it in my own words. Here we go:

A pilot is taking his Piper Cub for a flight around the pattern on a lazy afternoon. He is number two behind a Beechcraft King-Air taking off ahead of him and thinks to himself; “Would it not be cool to fly a 10 seat twin engine turbo prop like this?”
A little bit later the King-Air cruises at 29000 feet and the pilot starts day dreaming. A  twin engine passenger jet is overtaking him at 35000 feet. It is a Boeing 737 cruising at Mach 0.78. He thinks to himself, “one day I want to fly a passenger jet like this!”
Shortly after that, the Boeing captain hears an Airbus A380 checking in on the frequency at 41000 feet, flying Mach 0.85. “One day I want to move on to a wide-body aircraft like this" he says to his first-officer.
As the A380 is cruising along the Florida coastline, ATC advises that a Space Shuttle is about to be launched of the left hand side. “Wow the A380 captain says. If ever I could become an astronaut!”
Once the Space Shuttle is in orbit, they look down on Earth and see the little Piper Cub. “If only I could fly that little Piper Cub. That would be so cool the commander thinks to himself”.