Pic(k) of the week 20: Those who build Dubai

There is no question about the fact that Dubai has and still is, being build with the help of more than half a million blue collar labours from South-East Asia. These people from countries like India, Pakistan, Bangladesh and Sri Lanka, mostly live in company provided accommodation, often referred to as labour camps; three to four story buildings packed with shared bedrooms.

Several years ago, there was a lot of critique about the bad conditions some of these people were living in. Television documentaries made by the BBC and others went around the world like a wildfires and obviously gave Dubai a bad image. I've been told that the Government is working hard to improve the living conditions and the application of the existing labor rules.

Looking to photograph the people living in these places, I connected through social media with Fahad Bhatti; a Dubai based Documentary photographer who's originally from Pakistan. Having spent most of his life in the UAE, Fahad recently shared some of his images made in Sonapur; a large area packed with labour camps on the Sharjah/Dubai border around a cemetery; rumour has it that Sonapur (Hindi for City of Gold) presently houses over 300.000 people (estimate).

Last Friday, I managed to shoot with Fahad together at Sonapur. Likely the start of a new Personal Photography Project; "Those who build Dubai"! I would like to highlight that the new project is all about the people themselves and not about the negativity of the labour-camps itself ; trying to bring a brighter and more positive side to the story.

The image below of three Sri Lankan friends, seemingly having a good time on one of the very busy Friday markets in Sonapur, will hopefully bring across that message! Even though it is quickly becoming too hot for outdoor photography in the region, I'll try to visit the other side of Dubai over the coming weeks...

Especially on Fridays (the only free day for the workers), Sonapur becomes a very lively place; very different to the rest of Dubai it is buzzing with people. 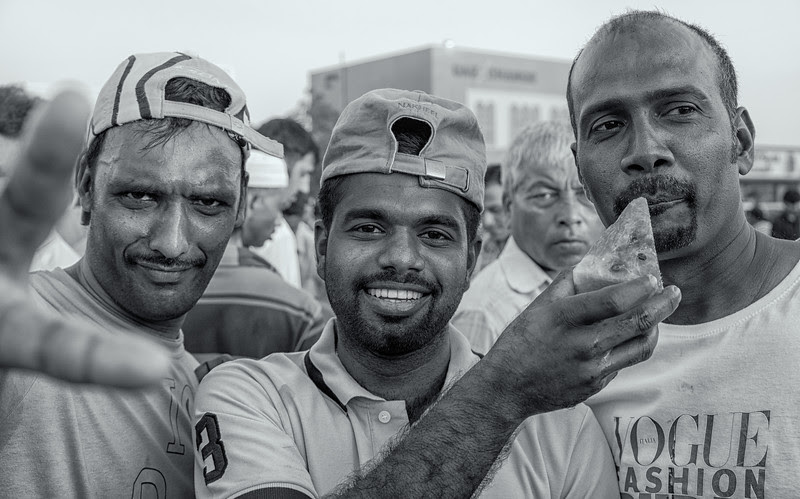 A 2 min slideshow with some of my strongest images of the project so far, can be found below.

Remember: " Nobody has ever become poor by giving" - Anne Frank